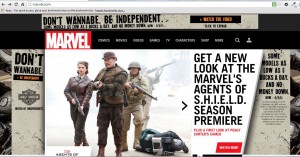 I chose to take a look at Marvel’s official web presence for this project. If there was a prototypical image dependant format, I assumed this would be it. The images chosen for display set the stage for the vast span of hero brands across the Marvel “Universe.’ The banner images segregated themes, and drew primary attention to the most recent of the franchise projects.

Despite the image intensity of the home page, the content data size seemed highly optimized. The largest images -the banners- weighed in at around 250-280KB. The second largest -main images- were all right around the 100KB mark. The greatest majority of the images hovered around the 25KB mark.

With images disabled, despite the expectedly bland appearance, the page continued to be navigable. The pages suffered a palpable lost of interest and felt disconnected without logical visual cues to direct focus. Navigating the site became less intuitive, and harder to skim for information on where to go. It was immediately apparent that imagery and consumerism are highly connected as none of the pages suffered worse from this developer setting then the “Shop’ page. Without the pictures I had nearly no idea what I was setting up to buy.

My general take on the effectiveness and use of images is fair. I was impressed with the optimization of image size: expecting a higher data dent from a graphic intense interface. However I believe the use and placement of these images could be more efficient and less incongruent. I feel unworthy to critique an industry leading entity like Marvel; however the execution of the page honestly felt conflicted.

The banners reflect the brand fracturing which Marvel is currently engaged in: splitting time between movies, comics, made for TV series, news on what else Marvel is doing, etc. The placements of these themes seem to reflect no company philosophy or image, but rather an unintentional chaos of current release dates and next opportunities to buy/watch/engage. There is little introduction to these projects, or Marvel its self, should you not know what they are already, The various sections make the users experience unfocused.

It feels a bit like getting smacked in the face with everything up front, with little incentive to connect with any particular point. You get the feeling you’re stepping into someone’s club. Are you invited, or should you leave before they catch you here? Summed up, the layout is over stimulating without sufficient user captivation or invitation.

There was just a little of the “comic flavor’ heritage visible in the creative expression, but the identity felt split between Marvels heritage, and its Hollywood pursuits. The theme I felt could be better integrated so they don’t appear to conflict. This is just a personal opinion however.

My conclusion is the site has good developers, and is at a minimum standard for what I would expect from a large franchise. However overall I was disappointed. I expected to travel to an awesome world of fiction, to the home of childhood hero’s and rarely disputed champions of the comic world. Which to be honest felt contrastingly unimaginative and commercialized.

“Up next: Spiderman, and Cyclops go head to head with Siskel and Ebert; Death-match over new copy write  pop-tart box design… Be sure to vote which superhero gets voted off the box! Follow us on twitter’