I decided to review the use of images at ArsTechnica, a popular technology news website. While the site lacks the extreme technical detail it was once known for, it isn’t a bad resource for tech news in general.

The main page seems to support about forty-five to fifty images on a regular basis. Cycling of ads and story content may help to explain the variable count. To wit: not all Ars headlines are accompanied by an image. I also loaded the site across a few different browsers to verify. Both Chromium and Safari required a manual count with the built-in tools, but some other development tools I’d installed under Firefox (i.e. Firebug) provided a flat count of fifty images. Of course, another aspect of that Firebug identified 54 images totaling about 847 kilobytes.

The images on Ars serve a variety of purposes to include branding (the stylized Ars Technica logo), navigation utilities (a home button), revenue generation (advertisements), and perhaps most importantly, they are used to catch and draw reader attention to stories. If I’m not mistaken I saw some 1x1px spacing images, which are generally used to resolve layout issues though such techniques have been considered bad form by some developers since the late 90s.

It seemed the site remained quite navigable after images were disabled/turned off. I noticed a couple of CSS/HTML elements that were heavily stylized, elements that could have easily been mistaken for images were any appearing on the page. That caught me by surprise! As of late, the Web has been making a lot of headway toward becoming a more graphical environment. To wit we’ve seen rounded corners implemented on CSS boxes, transparency, gradients, and even some text effects with HTML5. While it seems such tools aren’t quite ready to replace static image content, seeing some of the features utilized means content developers are beginning to use them.

I’ve always been impressed with Ars’ use of images. Even where images paired with the stories don’t make direct reference to specifics of a given story, they often help the user to quickly categorize the story. IMO Ars represents some of the better use of graphics on the web insofar as news sites go. Not sure how I feel about the placement of the primary banner ad, but in the end it is a free site and you get what you pay for. 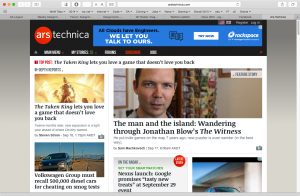